by Stephen Rowe
and gift it away in a flutter of progress:
fold it in coloured paper like an origami crane,
a creature of bluest possibilities stood wading
where waves once stroked the shore;
it will satisfy their ends as only
the passive can: a coastal zoo complete with
animals, quaint inhabitants, seaside villas
toured with a view of tomorrow in the offing;
a bird aimless in the sea with a wake
broad as a five hundred year history,
each day thoughts of its hatching misting over
in the thickening fog of the North Atlantic.
And the heart’s continental shelf
with its depths of longing; that legacy demands I
fold a thousand origami cranes of my own,
a siege of paper swarming crests of white, of blue.
Posted by Paul Vermeersch at 4:21 PM

I’ve grown obsessed with keeping things preserved,
folding bedsheets crisply as unread books, attending
churches built so sublimely Jesus would dismount
the cross and grab communion if he could. He believed
in eternity. If I shift my gaze with simplicity and without
aspiration to familiar souls and objects I can stare for
hours and none of them will change. That which moves
away from me isn’t necessarily afraid and that which
moves toward me is not always in love, I’ve learned
to say with a quieter honesty, surrounded as we are
by the cavalcade of powers and lights and agencies
some of which I’m for but also those of which
I am against, it being a happy coincidence I can be
both at once. Of happiness, I forget what I have done
and imagine other names for it. They have many
likenesses, are each alike, like most of what’s beyond
my grasp. They’re nameless as seconds. They’ve taken,
in their inane, fog-like disregard for details, the bulk
of what’s transpired. Once I could conjure, and no
They take it without prejudice. They’ve confiscated
my recklessness also, replaced it with refinement of taste.
They take their time. But they musn’t take
my island. Though I don’t live there anymore
it’s all I have left to remind myself. Of myself.
The weather today is exactly as I remember it
yesterday, and the week before. I’m convinced
that this is remarkable, that this light breeze is here
while the island remains, is theirs but wondrous,
because it is. It is a perfect day for a swim.

Posted by Paul Vermeersch at 7:11 PM

by David McGimpsey
They will take my island because they're young
and it was either that or listen to Stacey's story
about how Bill was, you know, all like that --
really, what else were they going to do?

They will take my island and rename it
in a few mumbles. The nomenklatura
of their pamphlets and updates will insist
I'm having sex with Sarah Palin.

Soon, I will not be able to do much
but type smh (shaking my head)
because my eyes will be the eyes of a termite
seeing only Dr. Oz's disapproving stare.

I'm still glad for all the good-lookingness.
Got ninety-nine problems but Amaryllis
ain't one. Through river marsh, then birch forest,
up a granite hill, is where I'll be buried.
Posted by Paul Vermeersch at 12:30 PM

by George Murray
1.
The surf arrives at the shore and seems to retreat.
A change in perspective has it neither coming
nor going, but rather lying still and panting
on the sand and rocks in rhythmic breaths, like a man
prone on a couch—a baby asleep on his chest—
eyes open to the ceiling, counting the pulses
time makes in his ears, every thought a wasted thought
because he cannot move, cannot lift a hammer,
cannot forge a notion over dead embers.
A living for living's sake—the linear flows
of blood and time a façade of always going
forward—or pushing from behind in a closed loop.
Every blink, every twitch, every sweet squeak and shift
in position, every everything—these pieces
of time slide away, but don't go anywhere.
The waves arrive and arrive, without end.
2.
He looks up, past the child's head, wonders if the couch
is a kind of shore, if the ceiling makes a good
last horizon. He's where home has become itself,
and won't cease being itself, like a second hand
ticking, like a surf rolling. There's a vibrating
recognition of time—the physical, fleeing
ticks from a clock not of this room, revealed in blasts
of blood through his ears. The blue troughs of his veins lie
like aqueducts in hillsides of still muscle,
pushing in pulses against the skin, his eardrums,
the couch, the baby on his chest—his heart knocking
on the ribs in a time designed to soothe, every
breath from the boy's nose in harmony with his own
quivering air—rising now, then not—unhurried
bellows exhaling on some slow, well-contained fire.
Knock, knock. Knock, knock. Knock, knock. Please, let me out.
3.
Time piles up on him in expectation, even
as it slips away in ambition. The child lies
cheek-down on his chest, an important paperweight,
rock on his living beach—or a black spot among
the stars, a hot singularity into which
all his light falls. And despite his hollow witness—
the systems laid out in ceiling cracks like massive
drains down which he gets sucked in spirals, clockwise
down towards the Undone, which is the Undoing—
he knows he won't trade this accident victim's view
for any other. Another couch or castaway
beach, another blank ceiling would only offer
another site for the same ticking in his ears.
Below his chin a fontanel throbs like the sea—
a small extra shot at life matching his own knocking
blood—the surf that neither comes nor goes.
Posted by Paul Vermeersch at 11:17 AM

by Jacob McArthur Mooney
for Michael Bates, Prince Regent of Sealand
I am the prince of a pirate's clutch of paper,
plucked from the shucked off vestments of Empire.
Squatters rights will set your bones. Relax.
Knit a flag. Turn your music up real loud.
It's inside us all to be ridiculous and kings.
They will come to take the island that my father
took from them, the island that they cobbled out of pure
army ugly, then pushed off the edge of British waters.
At the Micronations Conference, we proctored
our relations. Everyone agreed to recognize
ambassadors. Trade relations were established
with a commune in Kentucky. We ate cake to celebrate.
Say the word and slip your citizenship. Be loose
or libertarian, uncoil the go-fuck-yourself inside of you
for borders. Produce an heir. Make the papers.
Blather you way into wars and cult support.
I live on the mainland. It rains every day.
My father's left for Spain. A fire burned for weeks
with no one there to put it out. The courts are cooing
for our novelty. Seagulls shit on our deck.
They will take my island, preserve its name
in comedy, in the smirks of London papers.
The wings of Britannia will open up above us.
They will bury us in leaflets and logic and The End. 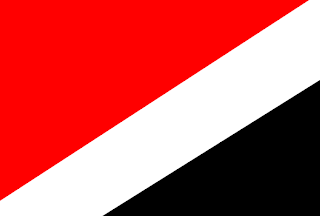 Posted by Paul Vermeersch at 10:55 PM

by Chris Banks
beginning with a line by Larry Levis
My love and I are inventing a country
without people, or a need for people.
There are no cities and no governments.
Everywhere is blue sky and cold rivers
and enough sunshine to warm ourselves.
We are not old and will never grow old.
No vanity and no arrogance derail our lives
in this country of our creation. That is,
unless my love were to leave me here
in this country where walking across it
I should eventually come to its watery edge
and see it as an island for the first time
knowing she has taken my island from me.
Posted by Paul Vermeersch at 1:26 PM

After a thread of milky light splits his mother’s abdomen, there is no one on the island to address. Lichens ice his toes. His solar-plexus writhes, a pinwheel twined with serpents. Only a reflection attends his grief—that marshy countenance which beguiles the mooncalf with wavering. So words, he thinks, do no more than just appear, and their images are merely place holders for the senses. But how else will he invent a world, or provoke his erudite, self-affronting host? Let’s say the ocean mingles with the shore, sidles up, flashing the silver of its thighs. Let’s say all metaphors are lies—a cross between the apotheosis of desire, and the starved mind’s sharpest trick. He imagines vast rolling swells, and a galleon fleet, masts slow-motion scrawling ciphers on the sky’s frayed parchment. Is he a sorcerer now, or has he been too long alone? Poor Caliban. Hagseed. Enter the castaways, staggering dumbly ashore, streams of saltwater gushing from their throats.

Posted by Paul Vermeersch at 2:41 PM